Stepping into the Future at Barbara Walker Crossing

After nearly three years of concentrated planning and development, the much-anticipated pedestrian bridge connecting the Wildwood Trail over West Burnside came to realization in 2019. The Barbara Walker Crossing was crafted to carry the 80,000 hikers and runners who use the Wildwood Trail each year over a tragedy long waiting to happen: the dangerous at-grade crossing on West Burnside. The new bridge provides a safe connection between two of the Wildwood Trail’s most popular destinations, Hoyt Arboretum and the Pittock Mansion. An average 400 people each weekend day crossed Burnside before the bridge; 2,000 cross it today.

The Crossing is named for the late Barbara Walker, one of Portland’s most ardent champions of trails, connecting parks and outdoor spaces. In an unusual public/private partnership, Portland Parks Foundation led this project, raising the money and hiring the designer, engineer, and contractor. Portland Parks & Recreation, Portland Bureau of Transportation and Metro each provided money and bureaucratic and technical expertise. The Crossing is, effectively, Portland’s first crowd-funded bridge with more than 60 percent of the budget coming from over 900 individual contributions from foundations, businesses and hundreds of individual donors. The design and construction team and donated countless hours of services early on in the design and development phase to ensure the Crossing project was set up for success.

Designed by nationally renowned, Portland based artist Ed Carpenter, the crossing is intended to blend seamlessly into the natural surroundings. Featuring a walking surface crafted of unique fiberglass panels, the 180-foot bridge curves over Burnside with a 150-foot radius. The sides of the bridge are highlighted by striking green branches that resemble ferns and evergreen needles, and over time the unpainted steel will seal itself with an earthy reddish-brown rust color, further integrating it into its surroundings.

R&H Construction won the contract to oversee fabrication and installation of the crossing in 2016. For over two-years, the general contractor and engineering team performed preconstruction services to help guide final fundraising efforts. During that time, several construction methods and procedures were analyzed for constructability, durability, aesthetics and cost to ensure the highest level of quality and value were achieved. Great attention was paid to properly stewarding the contributions of hundreds of individuals, businesses and government agencies. Another critical element: the bridge would need to be lifted into place quickly to minimize disruptions to Burnside, one of the busiest roads in the region and a major artery for emergency services. 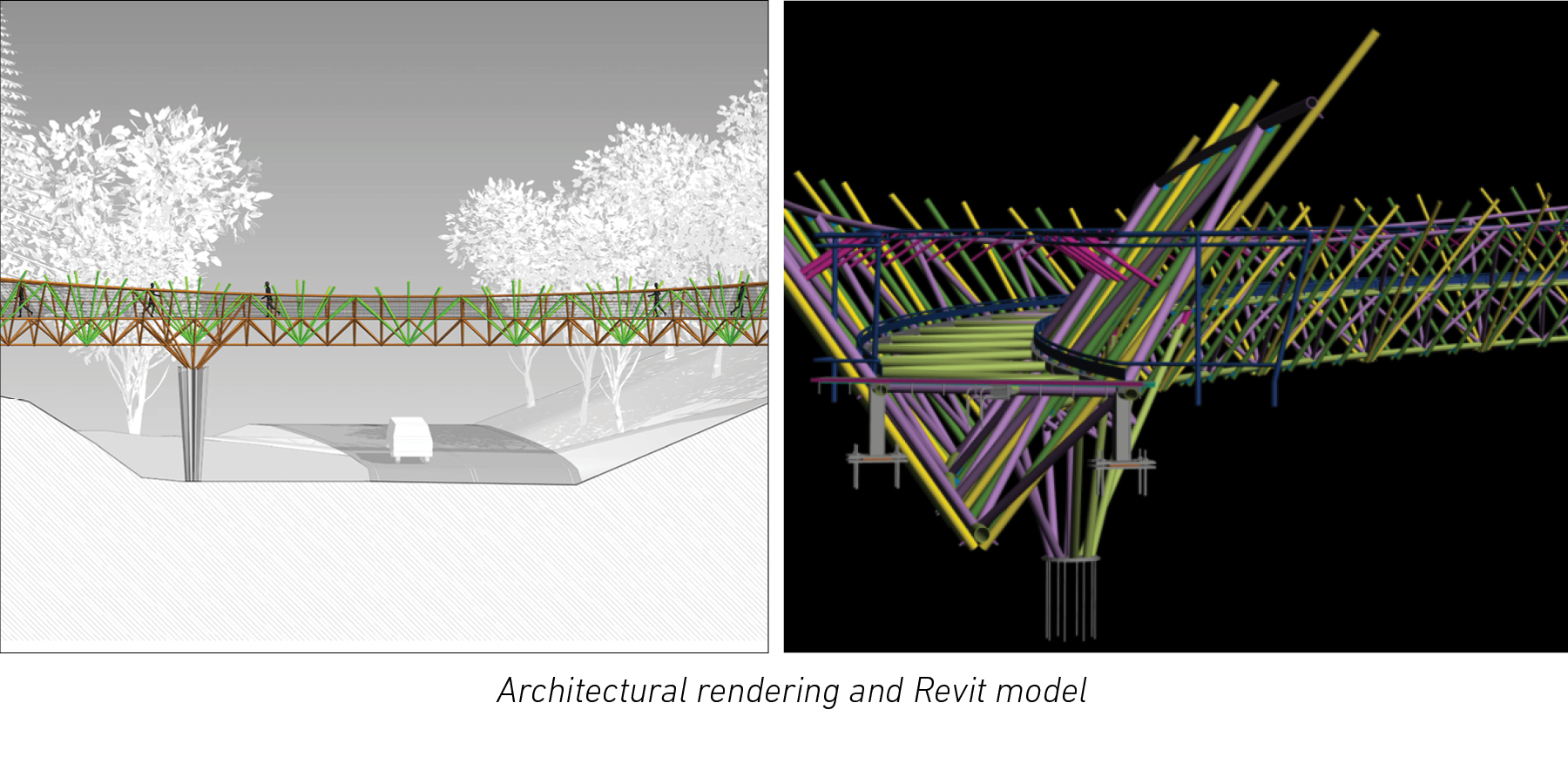 The truss bridge was fabricated by Supreme Steel in their shop in Northeast Portland. Materials incorporated in the construction included galvanized steel, weathering steel, a fiberglass decking system, and a stainless-steel mesh protection barrier that was manufactured in Germany. The entire building team took great pride in crafting the bridge with the highest level of workmanship. During fabrication, careful attention was paid to the quality of each individual weld, which was subject to regular inspection by multiple entities. The engineering and fabrication team utilized Revit extensively to detail and evaluate each of the complicated node connections on the truss. A detailed quality assurance and quality control process was also followed to ensure the painted members of the bridge were coated without flaw to stand the test of time.

While fabrication was wrapping up at Supreme Steel’s warehouse, work was underway at the site on West Burnside to prepare for the highly complex delivery of the bridge. Concrete abutments were placed on the steep hillside both north and south of Burnside. The south slope’s sharp grade required crews to create a temporary path in order to gain access to drill and install rock anchors. Due to the pristine environment surrounding the site, decommissioning this access path was done with extreme caution in order to preserve the natural setting.

Once fabrication of the bridge was complete at the warehouse, the 180-foot structure was cut into three sections, weighing 5.5 tons, 8 tons and 10 tons each, and transported to the site on individual semi-trucks over a span of five days. This transport was highly complex and required exhaustive pre-planning to ensure a safe and successful arrival at the site.

One of the primary challenges was access to the site. Navigating the large loads through downtown Portland was deemed highly challenging, so the only other option was to access the site via SW Barnes Road, through the historic 230-foot long Burnside Tunnel. Exhaustive pre-engineering of this transport revealed that the load would fit through this tunnel with a tight margin of 12-inches of space on either side of the load. Crews determined this was the best option and moved forward with planning for the bridge’s long, slow journey from NE Portland to the site via I-205 South to I-5 North to Highway 217 to Barnes Road. This transport was done in the pre-dawn hours and required intermittent traffic control on West Barnes and Burnside during the delivery.
While the first section of the bridge was installed, the other two pieces were welded together on the side of West Burnside. This work was performed in the tight staging area next to the road and within the east bound lane that remained closed for a limited time during erection. A challenging 8-hour crane pick was performed to lift and swing the second and third sections, over ¾ of the total bridge length, and marry the pieces together to unite the bridge.

The north abutment of the bridge includes a pre-cast artistic display that serves as the Donors Circle. In appreciation for those that contributed significant funds to the project, donors were honored with two-tone etched pavers placed in a circle formation at both entrances of the bridge. In order to achieve sharp and clear lettering, extensive mock-ups of the etched pavers were performed to ensure clarity for all letters and serves as another example of the project team’s commitment to quality.

“(The team) developed a bridge design a trail runner would love – a seamless, elegant extension of the flora.”

With 18,000 vehicles traveling on West Burnside each day, ensuring safe and clear traffic patterns were maintained and communicated was of the highest priority. R&H carefully coordinated with PBOT regarding all plans for lane and complete road closures. To limit driver confusion with shifting lane closures, work was sequenced as much as possible to keep all work on one side of the road before moving back to the other. All closures were carefully reviewed and permitted by PBOT making schedule certainty absolutely critical.

Safety and security for the site:

The trail was closed throughout the project with extensive signage indicating detours for hikers. Even so, many would approach the construction site looking for access to the trail, posing safety concerns that crew members had to be extra vigilant for.

Care for the surrounding environment: Extreme care was exercised to limit the amount of disruption to the trees, plants and animals surrounding the trail and hills bordering Burnside. At one point during construction there were birds that were nesting in trees near the site. Precautionary measures were put in place to ensure these birds were not disturbed.

Closing
The bridge opened to the public on October 27th, 2019 with much fanfare, including a parade, a tribal blessing and ribbon-tying ceremony. Guests of honor included Metro Councilor Sam Chase, Portland City Commissioners Chloe Eudaly, the late Nick Fish, and Congressman Earl Blumenauer. Prior to the public opening, key donors were able to experience a “first walk” across the bridge and view the donor circle. The end product is one that will be enjoyed for years to come by hikers, runners and explorers of Forest Park’s largest, most traveled passageway, the Wildwood Trail.

Want to start a project, become a subcontracting partner or explore career opportunities at R&H Construction? Reach out and we’ll connect you with the right team member to follow up quickly.